Lucy Guides Students Through the World of SpaceDraft

Lucy graduated from PLC in 2005 as a second-generation student and went on to spend almost a decade in Hollywood working in visual effects for an array of productions including Game of Thrones and Pirates of the Caribbean. 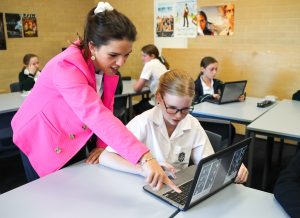 This experience in the film industry ignited her idea to build a virtual collaboration tool that enables virtual and physical spaces to be effectively planned before production.

“Right now, SpaceDraft software is being used every day on the new Mad Max film Furiosa to help the crew map out and visualize scenarios for the film shoot before they happen,” Lucy said.

Lucy’s love of visual effects co-ordination, her history with the School, and her PLC pride sees her return to PLC for various ongoing workshops with PLC’s Media students.

“It is a dream come true to be able to come back into the classroom at my old school where it all began,” Lucy said.

“In the Year 7 Media class, students are using SpaceDraft in exactly the same way as Mad Max; to plan out their shot lists and the positioning of props, characters, and cameras over time,” Lucy said.

This has sparked great interest with students, especially given it is a digital rehearsal tool designed to help students choreograph any plan in a fun and visual way.

While SpaceDraft has found its home in media, film and video game design, there are so many other industries that the technology can be applied to.