The PLC Perth Inspiring Old Collegian Awards celebrate the diverse and outstanding achievements of our alumni and provide the opportunity to inspire others through their recognition.

Nearly 15,000 women, and some men, have had the privilege of a PLC Perth education helping many to make their mark in a suite of professions, businesses, communities and families.

Espousing the PLC values of Learning, Effort, Community, and Integrity, the contribution to the global community by our alumni brings honour to themselves and to our School. These awards recognise their achievements and contributions to society.

The PLC Perth Inspiring Old Collegian Awards are named in recognition of two outstanding Old Collegians and Western Australians who devoted their lives to improving the lives of others and giving back to the community.

Recognises Old Collegians whose professional or volunteer accomplishments demonstrate a significant positive impact – locally, nationally or internationally. As an inspirational role model, they have made a difference to the lives of others through their dedication in giving back to the community.

This award celebrates achievement in the areas of innovation and entrepreneurship for alumni aged 40 years and younger. It recognises women who are pioneers in their field or fields. The recipient demonstrates trail blazing endeavours across community or professional life and has made her mark on the world through her commitment to furthering the interests of her chosen area of expertise.

Nominations can be forwarded by filling out the nomination form online (also available in hard copy).

Hard copy nomination forms can be scanned and emailed to oca@plc.wa.edu.au or posted to:

The winner of the Dr June Jones Award, which recognises an Old Collegian whose accomplishments demonstrate a significant, positive impact – locally, nationally or internationally, is an inspirational role model and has made a difference to the lives of others through their dedication in giving back to the community, is Diana deVos-Beck OAM (1960).

Diana has been heavily involved in the dance and ballet community locally and internationally. Diana has been the Principal Dancer with the West Australian Ballet (1962) and the Kalinka Dance Company (1972) and has danced with the Northside Ballet Company in Sydney (1972).

Diana created and ran the Diana deVos School of Ballet in New South Wales. In 1978, Diana passed the RAD Advanced Teachers Certificate examination and became a founding member of the Royal Academy of Dance Advisory panel of WA in 1982. She then in from 1997-99 was the chairperson of this panel and was the recipient of the Royal Academy of Dance President’s award in 2012.

In 1997, Diana co-founded the Terpsichore Dance Centre (TDC); a full-time dance school affiliated with the Northlake Senior High School to enable students to complete academic studies to TEE (HSC) level. Then, Diana became a lecturer of Dance at the Western Australian Academy of Performing Arts (WAAPA) from 1999-2008.

Diana presented at the 26th Annual International Conference of the Association for Dance Medicine and Science in 2016 in Hong Kong where she presented on “The Role of Health in the Development of Classical Ballet in W.A. 1950 to 2016”.

In 2015, Diana was awarded the Order of Australia Medal (OAM) for Services to the Performing Arts and in  2017, she was awarded a Fellowship of the Royal Academy of Dance. 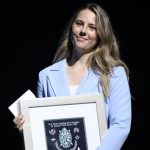 The winner of the Dr Patricia Kailis Award, which celebrates the achievement in the areas of innovation and entrepreneurship for alumni aged 40 years and younger, was Kendall Whyte (2010).

Kendall is the 2021 recipient of the WA Young Australian of the Year for her work in the establishment of the Blue Tree Project.

Driven by the suicide of her brother, Kendall started the Blue Tree Project to reduce the stigma of mental illness.

Blue trees can now be spotted throughout Western Australia and indeed, Australia. A former PLC boarder, her work is helping thousands of people to understand mental illness and prevent suicide.