It is with great pride that we announce PLC Perth has been named the national Secondary Schools’ Award winner of the coveted Dorothea MacKellar Australian Poetry Awards.

This prestigious award recognises students’ work which ‘stands out from the rest because the subject matter is individual or different’. Judges look for skillfully constructed poems, with memorable lines and poetic devices, such as alliteration, rhythm and internal rhyme.

PLC gained the national title thanks to many of our students’ poetry submissions, but particularly, a number of students whose work was considered exemplary by the judging panel.

Emily Pruiti (Year 12), was awarded Runner-Up in the Senior Secondary division, for her poem ‘boys i love’.

Fellow Year 12 student, Alexandra Ayers, was shortlisted for her submissions ‘Acres of Fenceline’ and ‘Speaking Yolngu’.

Below is a selection of their award-winning work. 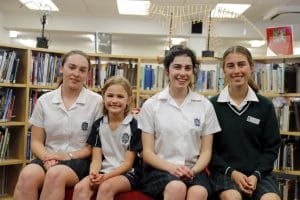 he is small and soft and
his dark eyes search for the most beautiful parts of you.
he longs for trust and safety. my eyes in his eyes in
my eyes and
his hand in mine.
when i show him magic he believes me.
he speaks softly and clumsily; always gently.
he does not have the voice of a boy but of a dandelion
making a wish.

he is tall and swells with watery strength.
he smiles shyly.
he is small inside and is always trying to
grow.
he occupies space he doesn’t understand yet.
he hides memories of  dancing and high-pitched giggles behind strength;
make-believe.
he tries to be a man but shaves his body hair is discomfort.
he does not have the heart of a boy but of a sapling
stretching
toward
the sun.

he is gangly and his hugs are gentle and long.
he makes me feel safe with his apologies and the way he tells me
it’s not my fault.
his anger swirls around that shadow i’m not sure is real.
he is reckless and clumsy and beautiful. he is surrounded by girls but
shoved amongst boys.
he hates the harsh world we gave him.
he does not have the arms of a boy but of the ocean.

he is stifled and silent.
he muffles everything he can to hide from their ultraviolet eyes. his despair echoes in his body. he
feels alone and mistranslated.
he is sweet and sends kisses. he is shy but
when he trusts he is as strong as the boys he longs to be.
he holds his body, confused. he does not have the body of a boy, but of
a light green caterpillar.

he is sweet and his eyes spill
into the way he stops to watch and listen and love.
he orders his mind as best he can;
he doesn’t know the mess is entrancing. he
thinks in twists and turns insisting on black
and white.
he thinks until he is exhausted from trying to stem
what pushes at his order.
he does not have the mind of a boy but of a tall
pine tree.

they fall from slanted trees, i catch them
one by
one
and cocoon them in my hands.
when i unfurl them they glint with speckled
sunlight.
when i fall they sit with me
and when i stand
they stay.

Judge’s Comment: This highly original and well-observed poem was a joy to read. I felt privileged to meet each of the boys in turn, from the shy and gently trusting to the reckless and clumsy, ‘surrounded by girls but shoved amongst boys.’ A quiet gem.

This was the fence I built last summer.

Cold strands of wire supported me
as I climbed.
The reverberations of my touch
echoed    a  c  r  o  s  s     a  c  r  e  s
and ran thick through the town
like the liquor inhaled at the three pubs
and the gossip that followed.

It was the middle of December
the boss woke me,
the earth was black but movement stirred.
Brand new wire cutters
heavy in my unskilled palm.

The bushy breeze hovered
unsure of whether to begin moving
perhaps, waiting for the sun’s fingers
to rake the earth.
Red dirt clouds mistaken for smoke
as men hustled to finish combing their gold.

I rolled the twisted, stretched wire
like the stomach of a pregnant mother.
Barbs to be feared as much as Standbacks
with their needles as thick as twine,
the colour of the native gum
but not so friendly after all.
I planted the new steel into the earth,
body rising with the silver posts
growing out of the nurtured soil.
Forever steel pickets
speckled the horizon.

An inescapable barrier shaped to endure
the drowning of the flood,
the cracked earth of the drought,
the attack of feisty feral pigs storming through it
as if it were a spiders web,
or the ricochet of a grey’s back leg
on the top wire, the thrash,
bone on steel ringing across paddocks.

This is the last time I will climb.
Last time I will be heard in the whistle of the Eucalypts.
I wasn’t coming home
but I knew how to survive
after all, I had a fence to guide me.

The sun still asleep,
air particles frozen in time
preserving the early serenity
like a photograph for evidence later on.
Hot humidity starts to trickle in
sweat sticking between skin and singlet.

The sour scent is wet, pads still fresh
“sick em”
muzzles trace the stench in waves
tearing into the thicket
trail barking, travelling miles.
Closely monitoring the tracker
the hunter runs,
sticking knife flapping down his thigh
308 on his shoulder.

The attack on feisty feral pigs
by praised hunting dogs
soon revokes, as
one brute of a boar charges
thick black hairs hunched on his back
tusks slicing malevolently,
white bodies torn to scarlet
gashed and gouged and gored
pulsating red
shoot the pig
shoot the pig.

They call it the build-up.

Judge’s Comment: A feast for the senses, Alexandra’s powerful poem slowly builds a threatening, sultry atmosphere where violence reigns. A solid contender signifying a poet with a bright future.

Swimming across the salty ocean bank

With turquoise waves chasing each other
backwards and forwards on the peach sand.

The sea salt I swallowed tasted like sour lemonade.

My braids with beautiful patterned beads were hanging
down my bathers.

Salty water was leaking out of them,
and dripping down my back.

Up at the sand I lay down on my towel.
Sun batting and burning like a crisp
near the boiling sun.

This is Bali, the place
where you will definitely find
me.