Clean Sweep for PLC at Head of the River

We might suggest they rename Champion Lakes ‘PLC Lakes’, after Saturday’s IGSSA Head of the River, where PLC took home all of the major trophies. 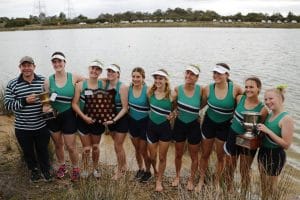 A cloudy, wintery morning did nothing to rain on their parade, as they powered to victory in both the First and Second Eight events and won the Head of the River Regatta Trophy and Overall Champion School Trophy.

PLC were hot favourites going into the final regatta of the season after an almost flawless run in the First VIII races, winning six of the past seven events, and nine of the last Wendy Zuideveld Perpetural Trophies for Champion School.

After a strong start in the final race of the day, the First VIII were ahead at the 250m mark and had pulled a boat length clear of their nearest competition by the 1000m mark.  The girls powered to a convincing win in 7 minutes 31.67 seconds, ahead of Perth College, MLC, St Hildas and Penrhos. 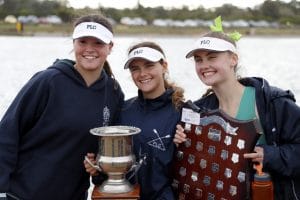 Head Coach, David Milne, Head of Rowing, Annette Pearce, and Captain of Boats, Rebecca Gunzburg (Year 12), celebrated the victory with their teammates and coaches at the PLC Head of the River Rowing Dinner on Saturday night.

Head of the River Race Results for PLC

Click here for the full Head of the River regatta results.