A Life Inspired By PLC Values

Old Collegian, Dallas Hickman’s life story is a tale of a heroine who has grasped every opportunity presented to her, and then reached for more. 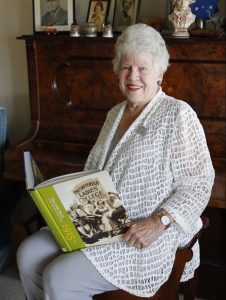 In her 82 years, Mrs Hickman (Milbank 1954) has packed more into her life than most, and she attributes her achievements and experiences to the values instilled in her at PLC Perth under the leadership of former Principal, Dr Vera Summers and Deputy Principal, Olive Cusack.

“PLC imbued in us a sense of ambition and a desire to reach out and extend our grasp on all we wanted to achieve,” Mrs Hickman said. “To go out and grab every opportunity that came our way, and that is what I did.”

Already showing signs of leadership at school – Mrs Hickman was a Prefect and achieved her Leaving certificate with six subjects and one distinction – she trained as a nurse when she graduated.

“It was the dream of my life to be a nurse, just like my Mother and Sister.”

She underwent her training at Royal Perth Hospital for three years before having the opportunity to travel to England and Scotland where she extended her nursing experience. Mrs Hickman added Midwifery to her resume on return to Australia but the desire to extract more from life was still strong.

In 1967 during the peak of Australia’s assisted migration scheme, Mrs Hickman sought a new direction and applied for a job with Canberra’s Department of Immigration. On the strength of her French and German learnt at school, and a smattering of Italian, she became a Welfare and Information Officer Shipboard, travelling the high seas and escorting primarily British migrants to live in Australia. She was the only woman among 31 men training for overseas positions.

Four years later came the biggest cross road of her life. As she was preparing to move to Rome, Italy as an Australian Immigration Officer, she was wooed by her one true love – husband John Hickman. The pair had met 13 years earlier but times had changed and so had their feelings for one another.

“He took me to dinner and across the table, asked me to marry him,” Mrs Hickman said. “I told him I couldn’t because I was going to Rome. He said, ‘well I’m coming to Canberra every weekend (from his home in Darwin) until you say yes’. It took him three weeks to convince me.”

She moved with him to Darwin where Mr Hickman had established a successful business in the fishing and prawning industry. Mr Hickman was also Honorary Consul for Finland, Denmark and Sweden.

Just three years later and with a 15-month-old son, Alexander, the young family endured a life-changing experience – Cyclone Tracy. Seeking shelter in an upstairs toilet, their entire house was destroyed.

“The sound was like a woman being tortured for eight hours.”

The couple was happily married for 17 years until pancreatic cancer claimed Mr Hickman’s life just weeks after Mrs Hickman had finished radiotherapy to treat breast cancer. On his deathbed, he dictated to her every nuance of running the family business. And so began Mrs Hickman’s next phase of her life.

Her experience at the helm of the Hickman Group of Companies led to her being made a Fellow of the Australian Institute of Company Directors, where she is a Foundation Fellow. She has been on the Committee of Rosewood Aged Care and Vice-President of the Karrakatta Club. Over the past 28 years she has volunteered for Tourism WA as a ‘West Australian Aussie Welcomer’, a Guide at the Fremantle Roundhouse, a Heritage Guide for the City of Fremantle, a Welcome and Information Officer at the Port of Fremantle and up until last year, an Ambassador or ‘Gold Coat’ at Perth’s domestic and international airports. She also founded the Cottesloe Book Club in 1984 and the Shakespeare Club the same year.

“All was inspired by my amazing education at PLC,” she said.

It was not until many, many years later that she discovered her path could have been extremely different.

“(My old teacher) Miss Barclay was about 92 or 93-years-old and I was 55. I always used to have a big walk with my dog around Cottesloe and I often saw Miss Barclay having a swim near the south groyne.

“One day we were talking and she turned to me and said ‘I have to tell you something after all of these years. When you were 15 and going for your Junior Certificate you were failing Maths. You got 49.5 per cent and I knew if you did not pass you would not be able to be a nurse. So, I gave you 0.5 per cent for trying’.

“I just turned to her and said Miss Barclay you could have altered my entire life.”

Every year at Speech Night the Milbank Book Prize is presented to a Year 12 student selected for doing their very best and trying hard – in recognition of the significant role PLC has played in Mrs Hickman’s life.